It’s not a great start.
For a new non-league football blog whose hastily made-up name promises pastry-based coverage from around the grounds, I must cut a forlorn and dejected figure when, at our first match of the season – Thackley AFC v Goole AFC – I find no pie to be had. Woe is, apparently, me.
This season, you’ll recall, I’m on the hunt to rekindle my footballing mojo, and it’s to Dennyfield where I head first. (More about that here.) 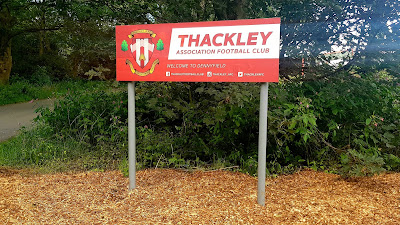 Pie-less, I bed in at the traditional clubhouse whose leathery lounge seats have supported the heft, I reckon, of at least a couple of decades worth of arse-cheek. I like it in here, with yer club ties available behind the bar (£7.50), its framed photos of teams of yore on the walls and its massive bags of cheese and onion for a quid. Next time I’ll come earlier and stay later.


It’d be refreshing to see clubs being a bit more imaginative with the beer offering, mind – it’s Tetley’s or Carlsberg for me, here – but I know this a football-wide thing. 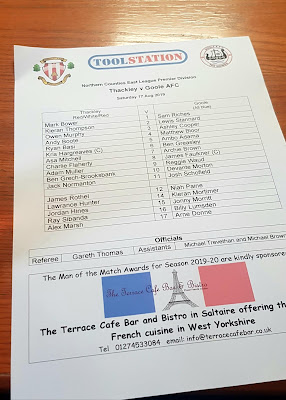 Sky Sports News, milking what it can from every bit of not-really-news news, flashes its big countdown timer, ticking off the minutes AND SECONDS ‘til the Hollywood Ball kicks off. I sup up. Seduced by the enticing whiff of greasy meat and meaty grease, I take my place by the tea bar where, despite a pie blackout, business is brisk in the burger and chips market. 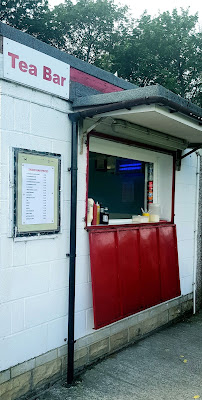 Right, a disclaimer. This isn’t going to be the place to find minute-by-minute match reports - does anybody read them - and, besides, one of the joys I hope to take from watching non-league football is the opportunity to get mildly sozzled in the process, which means you cannot count on my reportage to be in any way accurate. 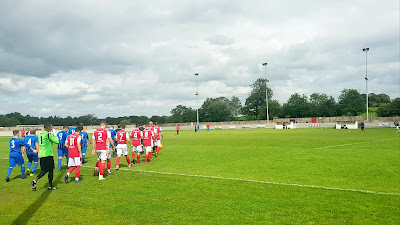 I do know that Goole come fizzing out of the changing rooms though, peppering the Thackley goal in a frenzied – yes, frenzied (I’m putting you in the action, reader) - opening ten minutes. In a classic move of wing-cutback-finish, it’s no surprise to see Goole go 0-1 up.
I think that their Number 7, Archie Brown, plays a part in that goal. He certainly plays a part in many of Goole’s best moves, pinging it about joyfully, and I Google him to see if there’s any history. I don’t think he’s the Emeritus Professor of Politics at Oxford Uni, who the search engine throws back at me first, but is more likely to be the lad who bagged a hat-trick on his league debut a couple of weeks ago. Well played. 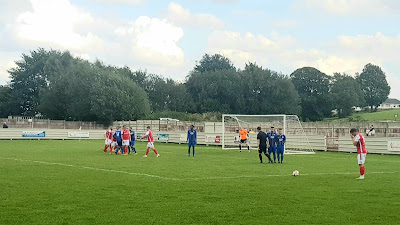 It remains 0-1 at half-time, with Goole in control but Thackley having, as we must say, a good go.
Thackley come out buzzier in the second half. There are goal-line clearances, cross-bar shuddering strikes and an old-school 50/50 in which I hear the unmistakeable war-cry of “’ave him!”, from not a supporter but a team-mate. Yep, I’m well into this.
It’s a tennis match of a last ten minutes, end-to-end action that sees a Thackley player sin-binned and a Goole penalty miss from the hitherto impressive Devante Morton, who makes it too easy for Thackley’s stand-in keeper. We end 0-1 and with Goole at the top of the NCEL Premier.
Word around the ground – yep, I’m the bloke earwigging – is that a few Thackley players are still away in sunnier climes, and I wonder if at full-strength this might’ve been a different story. But Goole are good for their win, strong throughout, with the dependable Ambo Adama and Ashley Cooper bossing it at the back.
After two games Goole top the table. I’m not too fussed about the score though. I’m here to try and re-engage with a game I once couldn’t get enough of, and, although without pie, I’m absorbed. 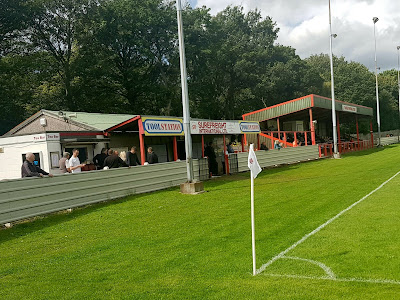 Dennyfield - professional but welcoming - is precisely the type of ground I want to visit, and
this - lively, involving - is precisely the type of game I want to see. more of. I haven’t been condemned to sit in one place for 2 dull hours, I can get a beer if I fancy and some people have bought their dogs.
There might not be pies but there is well-priced competitive entertainment, a warm welcome and massive bags of cheese and onion crisps. This is the stuff.