And so my quest to rediscover the beauty in the Beautiful Game, through a season in non-league football, takes me this week to Brighouse Town, where a sign near the ground welcomes me to Calderdale, a fella strolls past bearing a Bradford City backpack, and the souvenir shop flogs back issues of Huddersfield Town programmes. A free-spirited place, then.

This is officially the second game of my “journey” (more of that here), although I did catch some gripping Sunday League action on the Bank Holiday last weekend. The 6-8 score-line combined with a two-session hangover, however, rendered my narrative ability questionable, so I allowed myself to soak up the dubious refereeing, feisty touchline antics and many, many goals without thinking too much about it. Perhaps, really, that’s this game’s - or any game’s - true allure. 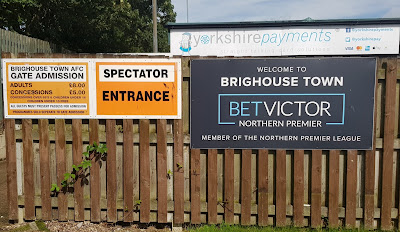 There is pie at Brighouse, but there nearly isn’t. From my seat at the far side of the well-maintained clubhouse I see pans and urns and toasters and hotdogs for 2 quid, and I see Droylsden staff huddled up tweaking tactics, but of pastry produce I see none. There’s a massive box of veg which, given a sharp knife and a big pot, could be knocked into a mean minestrone, but it’s only when I’m nearly a pint down that I notice the Pukka Pie heated cabinet, just out of my eyeline. I remedy the situation, sharpish, with a slab of steak pie, which is brown-sauced liberally. 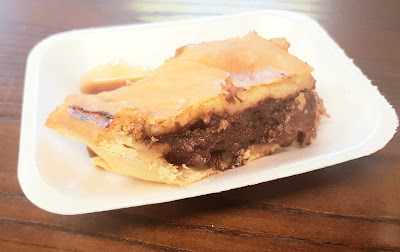 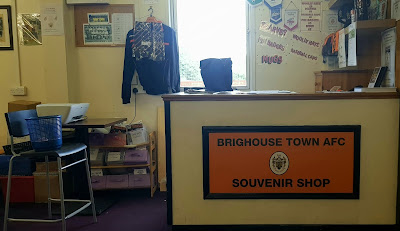 The beer, incidentally, at 3 quid a pint, comes from Halifax Steam Brewery which is based just around the corner. Bonus points for that. A volunteer doling out the snap also has a pint on the go, something I don’t ever recall seeing at Wembley or other Hollywood Ba stadiums. Another rubs out last week’s winning “Goalden Goal” numbers from the blackboard.

Powder blue skies and green trees swaying in the breeze give Brighouse a touch of the Hawaii’s today. Well, if you squint a bit. Supporters use the opportunity to soak up the last of the summer sun; most of us in the long stand down one side of the pitch, others plonked between the goals and the hospitality shed. Pints are plentiful. 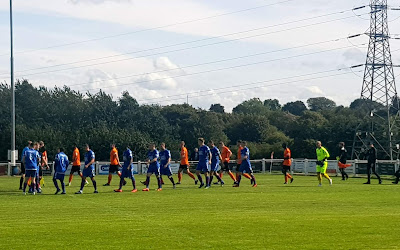 Today’s oppo, Droylsden, are level with Town on 4 points, but their -1 goal difference puts them a place beneath Brighouse who sit 14th in the Northern Premier League North West division. It’s the Lancashire outfit who come out sharpest and who, after 20 minutes, go a goal up through Daniel Wilkins.

An “enthusiastic” challenge and the subsequent air-bound body provokes a passionate debate from both sets of players with calls for a red card, but the ref – a calm authority throughout – resists. Brighouse perhaps have more of the ball, but had Droylsden converted their chances they’d be 3-0 up at half time. 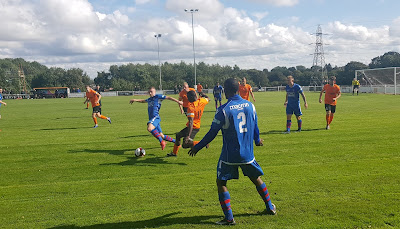 With the second half comes rain and hints of the ensuing autumn. I like Droylsden’s busy number 10 - George West - but don’t have much time to form a judgement on his replacement who manages approximately 60 seconds of gentle meandering before receiving a straight red for I’m-not-sure-what.

The lively Thomas “Robbo” Robinson comes on for Brighouse, a change that goes down well, and from here on the best football comes through him down the right-hand side. “Get one and we’ll get three,” shouts one optimistic supporter. “Wipe yer glasses”, replies another, and the afternoon proves frustrating for Brighouse, despite being a man up, as a steadfast Droyslden scupper all chances for an equaliser. The ref calls it a day just as another robust tackle goes in, about four yards from where I’m standing.

And it’s this closeness to the action that I’m enjoying the most, I think, as I attempt to reignite my footbal spark. Hearing the on-pitch crunches and the frustrations and the frank exchanges makes the game a more tangible first-person experience than being perched up high in a stand or slumped at home on the sofa. Not the prettiest game of football, then, but I’m not here for pretty. Bored of that.

“Right, time to go home and sunbathe”, says the old boy standing behind me.

“We’ll crush you 5-0 at our place”, drones a Droylsden supporter.