The night before our tour of the Olympiastadion in Berlin, Hertha narrowly beat Dynamo Dresden 5-4 on penalties in the DFB Cup, with the away side - a division beneath Hertha - packing their end with over 30 thousand voluble fans. At the same time, at a nice restaurant somewhere near the Gendarmenmarkt back in town, I was going at a plate of over-priced schnitzel and necking over-priced Pilsner. 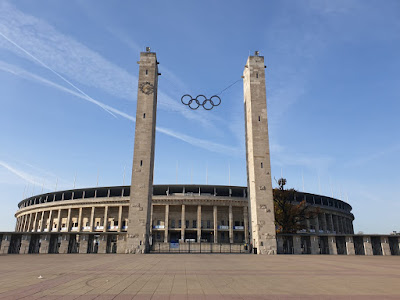 Twelve hours later, as we arrived via the prompt and reasonably priced S-Bahn, the clean-up operation is still in full flow. In the Olympiastadion's case, this "clean-up operation" means removing any indication that a football match had even taken place.

Hertha Berlin may have classed this as their home ground for over 50 years but during that time they've merely been tenants, and, as such, when they're not playing, down comes the bunting. The running track, in "Hertha blue", is the only clue towards this being their current backyard.

Possibly fed up of all this tidying up malarkey, Hertha Berlin will be doing one in the next few years, once they've made that important decision of where they'd actually like to relocate to.

The stadium tour, then, is less about Hertha and more about the arena's history, with a bit of "dodge the forklift truck" thrown in today.

The old place has seen some sights. There was, of course, the infamous 1936 Olympics, for which the stadium was rapidly built, and more latterly musical behemoths such as Beyoncé, the Rolling Stones, and, erm, Genesis have rocked up at some time or another. 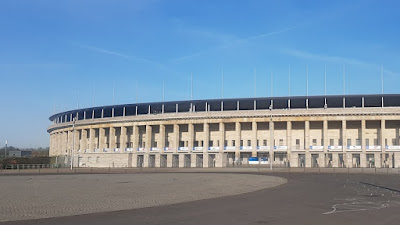 Influenced by Rome's Colosseum, our tour guide ruminates about that particular Empire and how "nobody got the hint" about what was to follow here. Fair point. It's a grandly formiddable place. 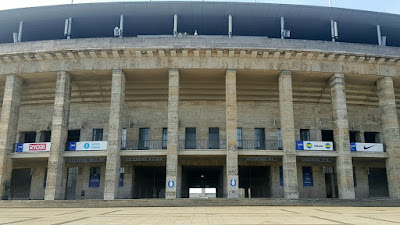 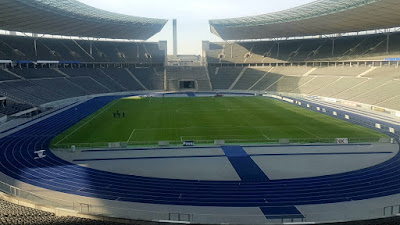 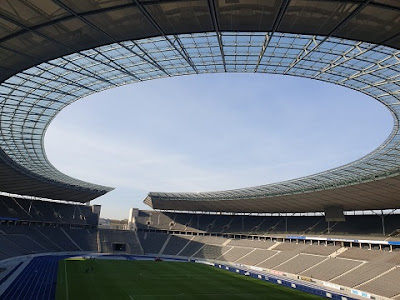 These are known as "The Leader's Steps", and lead from an underground entrance up to the posh seats that, depending on who's playing, can go for a few grand per arse. If it gets a bit nippy - and I imagine even on a warm day there'll be a chilly breeze here - that lot get tucked in with warm blankets. 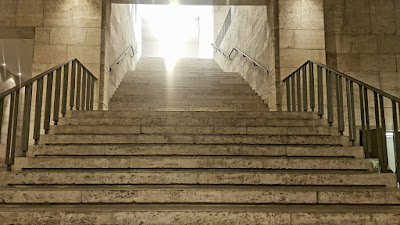 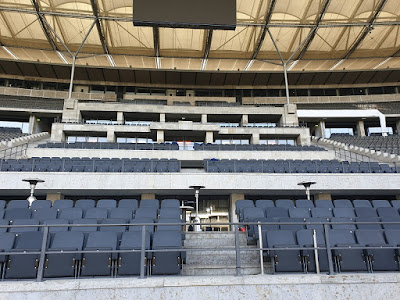 This is the section where, during the '36 Olympics, Hitler would meet and greet the medal winners. Unless it was Jesse Owens, in which case he suddenly remembered an appointment he had elsewhere and had to nip off. 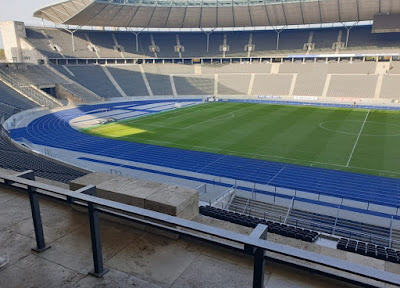 Down in the depths, beyond the "biggest party bar" IN ANY STADIUM IN THE WORLD (my photo's rubbish: imagine the glitz of the Ridings shopping centre in Wakefield, circa 1989) is the press room. They're still very proud of hosting the 2015 Champions League Final, when Barcelona beat Juventus and probably had a knockabout in this warm-up area.

There's a shortened sprint track in here, too, where Usain Bolt, I imagine, did a few lunges before popping upstairs to break the 100m record in 2009. 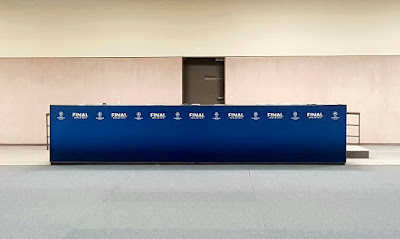 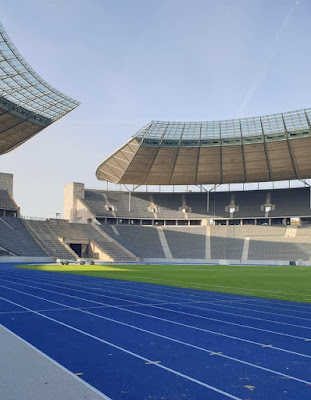 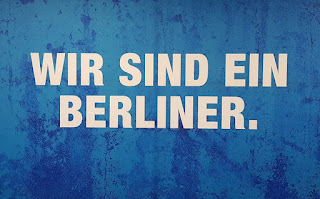 The tour lasts for an hour and our guide's excellent, chipping in with the pertinent stuff but also fine about folk having a bit of a wander. Indeed, at the end she more or less suggests we find our own way out.

It works out at 8 euros for each of us. A bit of sleuthing shows that Wembley's about 20 quid a pop, and if the price hike wasn't enough, it's in Wembley.

I'm having a season watching non-league football. Here's why.

a derby of sorts


And then there was pie.

Considering that I named this website in the belief that I'd be sampling some of non-league's finest pastry-based produce while at the same time reigniting my flaccid footballing mojo, the rough-puff's been in regrettably scant supply. And while today’s sustenance wasn’t purchased at the ground itself, I’m allowing myself this small victory partly because the subject of pie makes good copy but primarily because it’s less faff then renaming the blog. 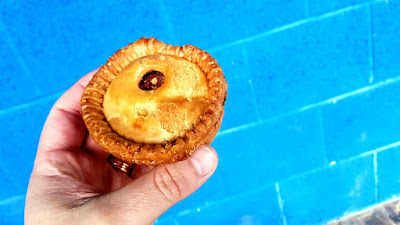 There was a rumble of dissent when I posted this picture on Twitter, suggesting that my Victoria Tearoom swag is more canape than pie. All I can I say is that this is Saltaire: they do things quaintly here. 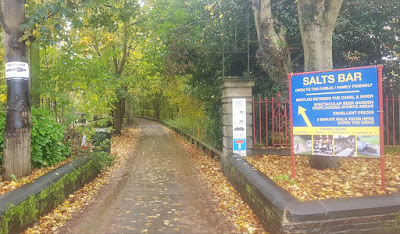 I’m not sure if there is any history between Salts FC and Ilkley Town AFC, but given that Saltaire - a UNESCO World Heritage Site - probably sees itself as a bit fancy, and Ilkley, up the road, definitely does, I’m classing today’s West Riding Challenge Cup fixture as a local-ish derby even if nobody else is. 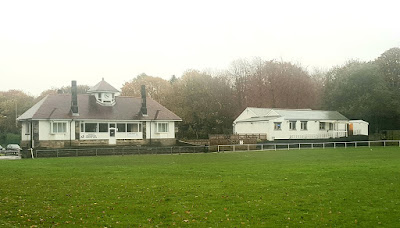 In dreich conditions it’s Ilkley, a tier above Salts in the West Yorkshire League, who set the pace; a thwack of a free-kick from the left-back putting them a goal up after ten minutes. Soon after, their Number 10, who if I was writing for a tabloid in the 1980s I might refer to as ‘leggy’, shimmies through the Salts rear-guard and dinks in to make it 0-2. 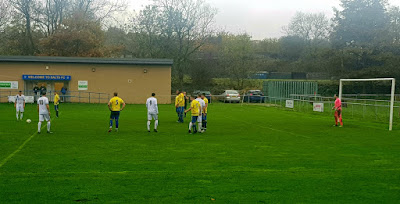 This second galvanises Salts who nick one back, and although we’re not quite into the realms of Rocky versus Dolph, they dig in rather than roll over, and the next hour makes for an entertaining joust in the rain between a well-drilled Ilkley side and a dogged Salts unit. 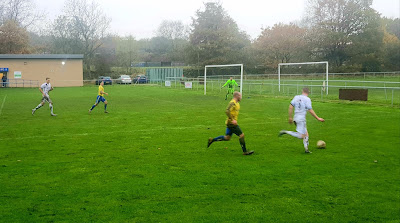 Half-time conversation turns to how Ilkley might get those shirts whiter than white again after this deluge of wet and muck. A handful of brave supporters scuttle round the pitch to the tea-bar. Most remain, wisely, huddles in the compact stand under the roof’s protection.

After the break, a keeper’s firm hand denies Ilkley’s ever-prowling Number 9, and there are similar scenes at the opposite end when the snappy Salts Number 9 is foiled by another display of determined ‘keeping.

Fightback very much still on, Salts make it 2-2 with a drilled finish from a committed Number 8 who’s in and amongst it all. “You’re killing yerself”, warns a team-mate, as he chases down another ball.

Legs get heavy. Rain gets heavier. Not too far away, trains trudge along the Airedale line but there’s little action on the canal running alongside the ground. Like I said: quaint.

The leggy one picks it up on the halfway line and lollops towards goal, shrugging off Salts attempts to nick it back, but pokes wide. Another Ilkley effort ends up closer to the Mill than the goal. But then that languid Number 9, who’s been well-managed up to now by a rugged Salts defence, is set up by two lively subs and finishes – I knew he could finish – to bag the winner and put his side into the next round of the Cup. 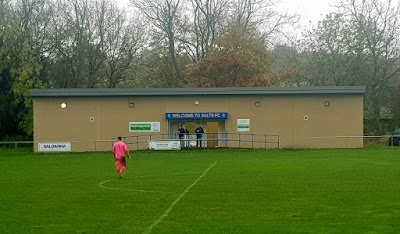 Football in the rain, under a tin roof.


Here’s why I’m having a year watching non-league football.