If I had any sort of consistency, of course, I’d have reported on an entertaining Bradford Sunday Cup final between Westwood Park and Station Hotel a few weekends ago. Two quid in, big crowd, red card after 20 minutes. Game interrupted so a man with a microphone could request - as a matter of urgency, please - that the cars blocking the gates be shifted immediately.

An absorbing 90 minutes with extra time and penalties chucked in to boot.

(Given that England will shortly be going toe-to-toe with our old German pals we won’t dwell too much on the P-word other than to say that if it does come down to them we can only hope that England make a better job of it than Westwood did that day, having lost a match they’d dominated because of a few daftly hit spot-kicks. Hard and low boys, hard and low.)

But I wasn’t match-fit to get the words in. Bit leggy. Bit hungover. So, like Westwood, we go again.

Although nobody can actually go anywhere, so we might as well play some football, and the Bradford Summer Cup is a pre-cursor to a season we all hope kicks on in a less stop-starty fashion than what we’ve become infuriatingly accustomed to. 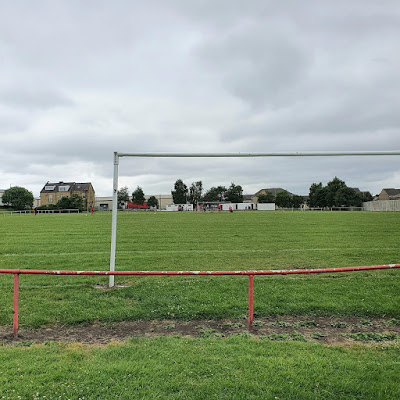 “Put those nets up”, is the direct but necessary request from a Westwood Park-er to a Tyersal opponent prior to kick-off. “Can’t, I’m too small” is the blunt but honest reply.

Despite the absence of several semi-familiar faces, and a couple of soon-knackered starters who’ve made the decision that a pitch-side kip is preferable to all this running about malarkey (fair), Westwood don't take long to get on top as Tyersal tire. By thirty minutes the away side, gradually getting through the gears, are two goals to the good.

Until, that is, that everlong period of time just before the break allows Tyersal to bag a goal judged by a Westwood player, speaking perhaps for us all, to be “the scruffiest I’ve ever seen”. The ball pings a post, the rebound pings another, and someone somehow nudges it over the line. They all count. 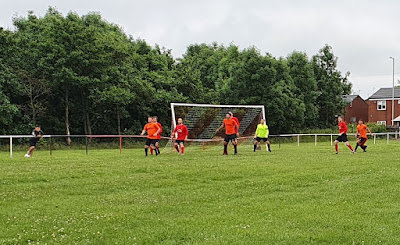 As do those scored on the other side of half-time, but this one’s Westwood’s, now 1-3 up and strolling, surely, for an opening win in a tricky away tie after some strong work and a thwack of a finish from Number 14. 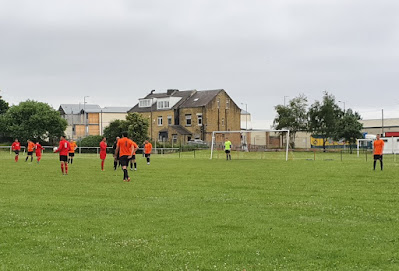 Side note. Despite the many positive and enjoyable things about Sunday league football it is a bit of a pain to not know who’s who, and to keep referring to players by their numbers like it's an episode of SAS: Who Dares Wins. As such, some creativity is required.
So Westwood’s Number 8 becomes not the Westwood Park Pirlo (scans well but too obvious) but the Westwood Park Manu Petit, for he’s got the touch and the hair, spraying it (ball not hair) hither and thither and, generally, bossing proceedings.
His midfield counterpart, Tyersal’s Number 4, isn’t too shabby either and helps to drive his team on, a bit surprisingly, to make it 2-3. Nope, there’ll be none of that blather about “tournament football”, “clean sheets” and “getting out of the group” around here, ta very much.

“It’s the grass, in’t it?” observes the Westwood Park gaffer as one of his midfielders waltzes around two tackles before his cut-back gets frustratingly entangled in a patch of overgrown greenery on the field of Tyersal dreams.

What happens next isn’t clear. I’m told there’s a cross-field ball, a penalty box melee (with a Westwood defender subsequently injured and taken off), and a Tyersal equaliser, but I’m too busy making the smart-arse Manu Petit note on my phone to see any of it other than the lively Westwood remonstrations.

And then it’s a “big last 10”, “big last 7” or “big last 5” depending on which of the ref, your captain or your manager you pay the most attention to. Whichever god of time you set your watch by, however, matters not. Both teams take a group-stage point.

Full disclosure: Westwood Park happen to be my local side. I had no idea it was such a decent set-up until I started watching them some time before lockdown but I’m now a die-hard Westwood Ultra (every other Sunday and, naturally, dependent on alcohol consumption the night before).

Pie notes: it’s summer, I’m cultured, and a smoked salmon bagel has already been consumed. There was however some sausage and bacon sarnie action from the cafe over the road, regretfully un-brown-sauced and therefore, I’m informed, on the dry side.