The BT Pub Cup Final at Wembley Stadium - let that ensemble of words sink in for a sec - is not a sentence that I ever saw myself writing, but here we are. All said and done, the home of football isn't a bad port of call for my first match of the new season. 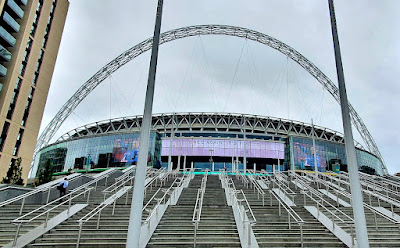 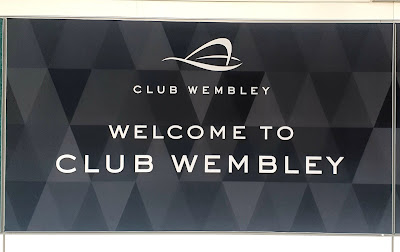 And it turns out I’m not the only bleary-eyed Bradfordian knocking about in the national stadium today, either. Northern heat winners The New Line have also made the journey down from B-Town and, with a plethora of tracksuited entourage in tow, appear to have assembled a European tour squad for the occasion, too. 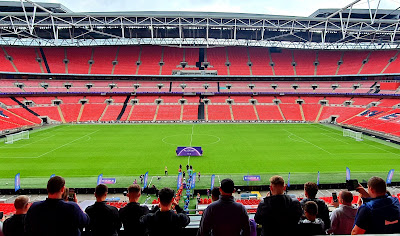 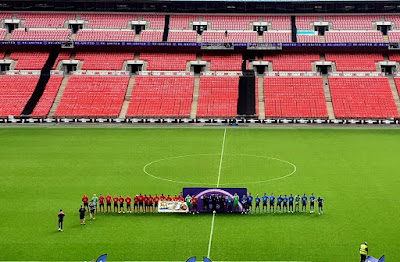 Even in the middle of August it can get a bit nippy in here, and for a minute I’m transported back to Bradford City’s Carabao cup final hammering at the hands of Swansea City back in 2013. A glacial February afternoon, that.

If you watch the footage back carefully from that historic day, you might just spot a handful of lads, with twenty-five minutes still to go, weaving their way shamefully through the half-frozen flag-waving claret and amber masses in search of the more snug environs of a local pub. The magic of the Cup, eh.

For today’s BT Pub Cup Final Wembley may be echoey and near-empty but the organisers have razzed things up enough to ensure that it doesn’t feel like a nothingy practice match or close-season kickabout. There’s a fourth official, there’s a massive trophy and from our lofty seats in the Royal Box we watch as the players emerge from the tunnel to Champions League soundtrack banger Zadok the Priest. It’s the best kind of bonkers.

There’s even a glossy matchday programme, which means I can refer to The Victoria’s early scorer using his Sunday name of George Rudwick rather than plain old “Number 14”. Nice freekick that, Rudders lad.

Lively captain Owen Scerri adds a penalty’d second on twenty minutes, much to the chagrin of the New Line Ultras a couple of rows in front of me, a sizeable squad who’ve come down to back the Bradford side. They do so vocally, between double- and triple-checking with each other exactly what time the Wembley bar will be open. Fair's fair. 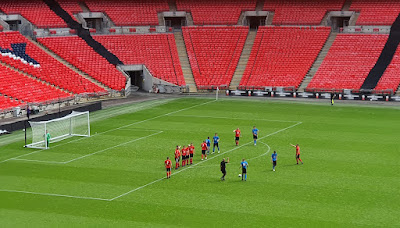 It turns out that a Yorkshire rendition of “You Fat Bastard”, aimed at nobody in particular, really reverberates around Wembley stadium when there aren’t many people in to soak up the sound. The sound carries. Soon after, a “You diving doilem” is directed at a player who's judged to have gone to ground a little too easily. Got the ball, ref! I could be 200 miles back up north in a boggy Bradford park.

The half ends with an ambitious overhead volley. Well, you would, here, wouldn’t you?

The New Line restart with intent - they’re decent when they get the chance - but the positivity is short-lived as Farrall Ryder, one of several players who appear to be a couple of pegs above the rough and tumble world of pub football, swooshes in another freekick for The Victoria. According to the programme this is only the second time that the team have played together, disproving in an instant those who blether on about needing 'time to gel'.

It’s a big pitch is Wembo, and in a show of sympathy my own legs start to turn to treacle on the hour mark even from up here in the padded posh seats.

In true pub football fashion my attention wanders momentarily while I consult Google Maps for the most direct route back to the boozer, and it’s in that moment that The Victoria nick what I'm told was a long-range-deflected fourth goal. 4-0’s a bit harsh on The New Line, but they can at least say that they came to Wembley and nearly didn’t concede a goal from open play.

Pies in the posh seats? Put your scepticism away. There were two, that’s two, pert little pastries with an interior of slow-cooked beef in thick gravy. Bonus points for the additional ladle of lump-free mash, but we’ll turn a blind eye to the sprinkling of watercress, which was surely an accident.

Like mum always told/tells me to do, I make use of the facilities before we depart, and in one of the more surreal episodes of life so far the soundtrack to my Wembley wee is a sweetly melodic version of “We Are The Champions”, whistled with sincerity by The Glenn Hoddle who's washing his hands at the sink.